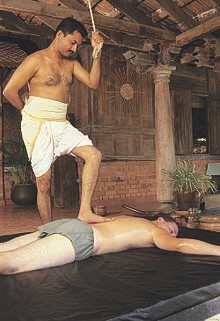 The philosophical orientation on which is founded the Keralite Massage or Chavutti Thirummal is inextricably linked with the concept of disembodied lines or metasomatic ducts. These lines, known as Nadis, are pseudo-anatomical areas where appear of the subtle energies within the somatic structure. The Indian genesis of the speculative system on which it is based, clearly referring to the medical and tantric yoga of the  hatha and laya species, almost certainly belonging to the realm of Shaivasiddhanta, and the Shiva Samhita. The three most important Nadis or lines are: Sushumna nadi, nadis Ida and Pingala Nadis. 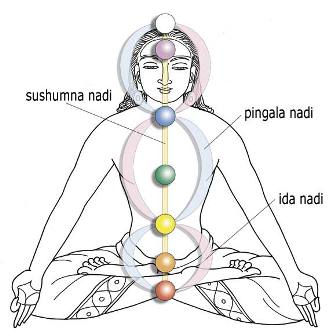 Nadi, whose literal meaning is river, is a Sanskrit word thatmeans the above lines in which circulates the prana, the subtle energy, which despite the name: ki(Japanese), qi (Chinese) praan lom ( Thai), Khii, khiimor(Mongolian), identifies the same concept. Not necessarily being tied to a mechanistic physiology, we have defined them pseudo-anatomical areas of energetic resonance. They convey the flow of the cosmic energy inside the organs of that mystical physiology, called in Sanskrit cakra, “circles” and kamala “lotus”, to the marmamwhich are the “hot spots”, those that shiatsu calls tsubo.
The texts repeat, that in the no-initiate, the Nadis have become “unclean,” and that they are “blocked” and therefore it is necessary to “purify” with asana, pranayama and mudra, in other words – we would add – with the Keralite Massage that is a good substitute. Disturbances in the flow of energy resulting from an insufficient supply of prana, which leads to disease. Working on these lines by massage can loosen blocks, stimulate the flow of prana itself and restore the general welfare. 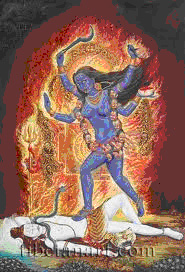 Historically speaking, this massage is originally from Kerala in southern India, and is practiced in schools of Katakalidance or Kalaripayattu martial arts in order to loosen the muscles. Traditionally the work is on the naked body with hot or cold oils depending on the season. And precisely this last aspect of the nudity that, sometimes constitutes a preliminary obstacle to the execution of the massage, has on the contrary a symbolic so deep connotations to elevate it beyond mere mechanistic aspects as well as energetic one. The ritual nudity in India, as in other traditional settings, is sacred. Digambara, in fact, means sky-clad, or clothed in his power as are certain ascetics.
The act of taking off one’s clothes, in this context, indicates the liberation from the constraints then the dissolution of the fictitious ego. In addition, the positions of the massage find a series of correspondences in the Indian tantric iconography. In particular one of these very explanatory of the vision of masculine and feminine within the Yoga describes Kali dancing on Shiva’s body.

Kali represents the creation, that is Prakriti or the nature and all the beings created by Her and Shiva, Purusha, the immovable awareness and at the same time the male support, which underlies the dance of the feminine principle, in other words the essence of the Keralite Massage.
The absolute, primordial nakedness of Kali represents the bright fire of truth that cannot be covered by Maya (illusion) that evokes the archetypal forces of the own ego leading to the sudden change of consciousness.
It is obvious that in this context, the massage plays a role of soteriological discipline directed to reinstatement of the human Self to his cosmic reality, which is the basic condition of the being. So, the realization of a Maithuna or of a interior mystical union, that allows the crystallization of an embryo of Arogya, the condition of pre-existential non-disease, and consequently extra-samsaric awareness. (ottobre 2011 – 22 Dic, 2013 ) 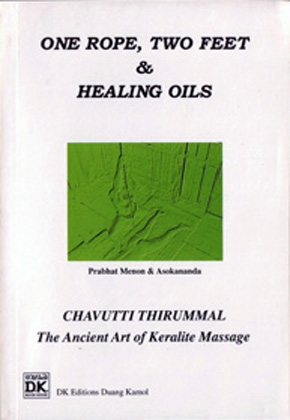