Sen-เส้น is a technical voice, specific of that epistemological orientation on which is based the thought of the oriental medicine and consequently one of its branch: the traditional Thai massage or นวดโบราณ– Nuad Börarn . In the Thai language it designates one of these lines constituting pseudo-anatomical

areas in which the subtle energies emerge within the somatic compages. Of the semantic point of view the word covers a considerable variety of meanings, synonyms and heteronyms, as for example: line, etc. By deepening etymologically the genesis of the phoneme, sen-เส้น, it reveals the assonance of the term in issue with the Chinese word xiàn (pron. sien) 线, rectified in recent times by毛泽东 Máo Zédōng with the imposition of the simplified characters, whose classical-allographic variation: 線, is homographic and homophonic to the Japanese “on”[1] pronunciation of “sen”.

Such enunciation would by itself result a datum worth of attention, by being, ipso facto, a prodrome of the presence of Chinese loanwords in the Thai-Massage terminology, dating back to that legendary era, in which it wasn’t completely standardized. Despite of that and especially of the modus operandi of the same, nevertheless, we can recognize what seems to be a further aporia: the inconfutability about the Indian genesis of the speculative-epistemological system on which is based the massage in issue. The same appellatives according to which are designated the three most important sens are examples, whose apodicticity echoes to the less used ear too: Sumana, Ittha, Pingkhala, indeed, in virtue of the directed homophony with the respective Sušumnā nādī, Ida nādī and Pingala nādī, rather of the homologous tradition of the meridians, sends unequivocally back to the medical and tantric Yoga, of  hatha and laya species, surely belonging to the within of  Śaivasiddhanta, and to the Śiva Samhitā, described in the works of P.Filippani Ronconi, M.Eliade and A.Avalon[2].

Nādī, whose literal significance is river, is, indeed, the word which in Sanskrit indicates the above-mentionated lines where circulates the prāna, the subtle energy. Not being necessarily bounded to a mechanicistic physiology, we have defined them pseudo-anatomical areas of energetic resonance. The Indian speculation of the Yogaconceives this prāna according to two dynamic polarities: the solar, reddish and igneous or Pingalā and the lunar, pale and telluric: Idā , moreover according to other eight different forms, which we’ll consider lather. The two polarities whose reciprocal alterity allows the arising of the vital phenomena, wrap themselves up around the spinal column, which is the seat of Sušumnā, the thread nādī situated within the cerebrospinal axis, mithologycally assimilated to the Axis Mundi, the Meru mountain or Sumeru of the Hindu tradition, seat of 33 Vedic divinities, in whose name Eliade recognizes a insertion of mythological complexes of Mesopotamian origin[3].

These nādīs, called also sirās, although this last term possesses a more iletic meaning, are metasomatic ducts which transmit the flow of the cosmic and divine energy within the over sensible organs of that mystic physiology, called in Sanskrit, cakra, and kamala “lotus flowers”, towards the marmam which are “the sensible points”, the same that shiatsu defines tsubo and vice versa. By paraphrasing this last reference to the marmam, we integrate a definition of F.Ronconi: “these insertion’s topoi of subtle energies within the physical compages, the areas where ojas, whose experience is typical of the deepest layer of the consciousness, appears in the soma.  Therefore they correspond to the western physiology know as plexuses, which is big nervous-vascular bundles, both to that harmonic resonance areas described in the Chinese medicine, or in the therapeutic branches, like the Tui na, and in the curative sections of some far-east martial arts, famous as kwatzu. These marmam, anyway belong still to that we could define a somatic physiology, in exact or exterior sense (…)”[4]. Regarding to this point, it appears to us symptomatic the fact that the scholar, even having mentioned the traditional kuatsu, – we don’t know how much intentionally – didn’t mentioned the shiatsu, this Japanese American neo-technique, of wide diffusion since some decade, a peculiar mixture whose origin is somewhat spurious and daring. M.Eliade e A.Avalon, by citing the above-mentioned text of Śiva Samhitā, describe the remaining nādīs, by specifying the existence of a considerable number, what – in passing – explains the apparent contradiction about the diversification of the courses within the various traditions.  Some texts speak of 300.000 nādīs, therefore 200.000, 80.000, above all of 72.000, including 72 having a particular importance. Among these A.Avalon enumerates 14, while Eliade synthesizes 10: the ten sen. These are: Idā, Pingalā, Sušumnā, Gānadhārī, Hastijihvā, Pūsā, Yasasvinī, Ālambusā, Kūhūc and Camkhinī, which, although don’t find a precise assonance with the thai sens, Ittha, Pingkhala, Sumana, Sahatsarangsi, Thawari, Ulangka, Lawusang, Kalathari, Kitchanna, Nanthakrawat, agree also a precise correspondence in the location of the respective start points, as well as in the dextrorse or levogyrous disposition in comparison with somatic axiality. “These nādīs, continues Eliade, emerge in the left nostril, in the right nostril, in the brahmarandhra (cerebrum-spinal axis), in the left eye, in the right eye, in the left ear and the right ear, in the mouth, in the genital organ and in the anus respectively; but exist some variants: some nādīs reach, according to other texts, the heels”[5].  The sole doubt can arise regarding the correspondence with the sen Kalathari, which, in virtue of its atypicalness we would not deepen in this within. By omitting the comparisons with the Chinese meridians too, profusely pointing out in the article of Cristina Radivo[6], we would prefer here to define precisely, rather, its soteriological functions (obviously not in a fideistic sense) with a particular regard to that epistemological orientation on which is based the oriental thought cited in the beginning. Such thought constitutes therefore the a priori reality of the medical art, both Indian and Chinese, but not just this, it determinates also the “spiritual condition” of the therapist. On the other hand, Filippani Ronconi, in the same article, reminds us that in the East the existence itself is a form of disease or rogya, in Thai โรค–rohk, either physic or metaphysic, since within itself comes true that the existential illusion which Hindus call maya, from which originates the afflatus for the conquest of the immortality and of the freedom, mukti or moksa, or by using a Buddhist category, nirvana, from the endless chain of existences called samsara.

Therefore he writes: “The healing is itself the beginning of a movement which leads to the immortality” which is postulated as practical purpose of Ayurveda[7]”. Also the massage, therefore, in such context possesses a role, although marginal, of soteriological discipline leading to the reintegration of the human Self to its cosmic reality, which is the primordial condition of the being. The texts repeat that, in the non-initiated, the nādīs are become “impure”, that these are “obstructed” and therefore it’s necessary “purify” them with the āsanas, with the prānayāma and the mudrās[8], or with a valid substitute represented by the Thai-massage, whose aim, is – we remind – to lead the above-mentioned energetic polarity, Idā and Pingalā, always in this tantric perspective that transubstantiates the body, to realize an interior maithuna or an unio mystica in the middle of the eyelashes, between the epiphysis and the hypophysis, seat of the psychic and noetic functions, whence to crystallize an embryo of arogya, the condition of preexistent non-disease and consequently of extrasamsaric consciousness.

By reaffirming the historic roots of the Thai-massage, linked to the figure of doctor Shivago or Jīvaka-Komārabhacca, exhaustively examined 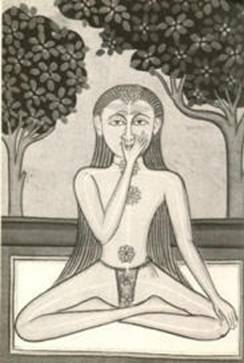 by Cristina Radivo[9], concerning possible reciprocal influences between China and India, sketched in the beginning, we are anxious to add here a further datum, reported by  P.Filippani Ronconi, who by citing the scholar J.Fillozat, in the whose memory, published in the  Journal Asiatique of 1970, he tries to reconstruct the history of the loans of the Taoism to the Yoga, since 646 a.C, when “Kumāra Bhaskaravarman, king of the Assam, received by the Emperor of China the translation of the 道德經 – Dàodé jīng of 老子– Lǎozǐ.

Asserting the author that, although the principles on which is based the Yoga belong to the Indian civilization, anyway in the evolution of the system as well as in the techniques can be recognized an undeniable Chinese influence (…)”, so that justify as a result a spiritual way, called cīna-cara or Chinese-way.  Simultaneously there was a Singhalese mission: Vajrabodhi, Amoghavajra and Subhākarasimha, who brought in China the most refined species of Tantra[10]. By amplifying further the research camp, together with a comparison to our euristic purpose of identifying a paleoasiatic archetype of massage which can subtend the existing oriental styles, we want to mention once again the most valuable article of the P.Filippani Ronconi, who in this mutual exchange of two spiritual currents – the Indian and the Chinese- recognizes the reverberation of a remote, especially beloved to us, Siberian-shamanic[11] heritage.

[1] By adopting the Chinese ideograms, Japaneses have imported their pronunciation too — called on —, modified according to own phonetic.

[3] M.Eliade, Lo Sciamanismo, Roma , 1983, pg. 290. The datum could have an importance for the possible influences that these complexes would have exerted on the topic of our article, per the circumstances in which his founder, the doc. Shivago developed himself, see. note 11.

[9] Vd. http://www.waithai.it/pizzico.php, of extreme interest is education in the city of Taxila, today Pakistan .